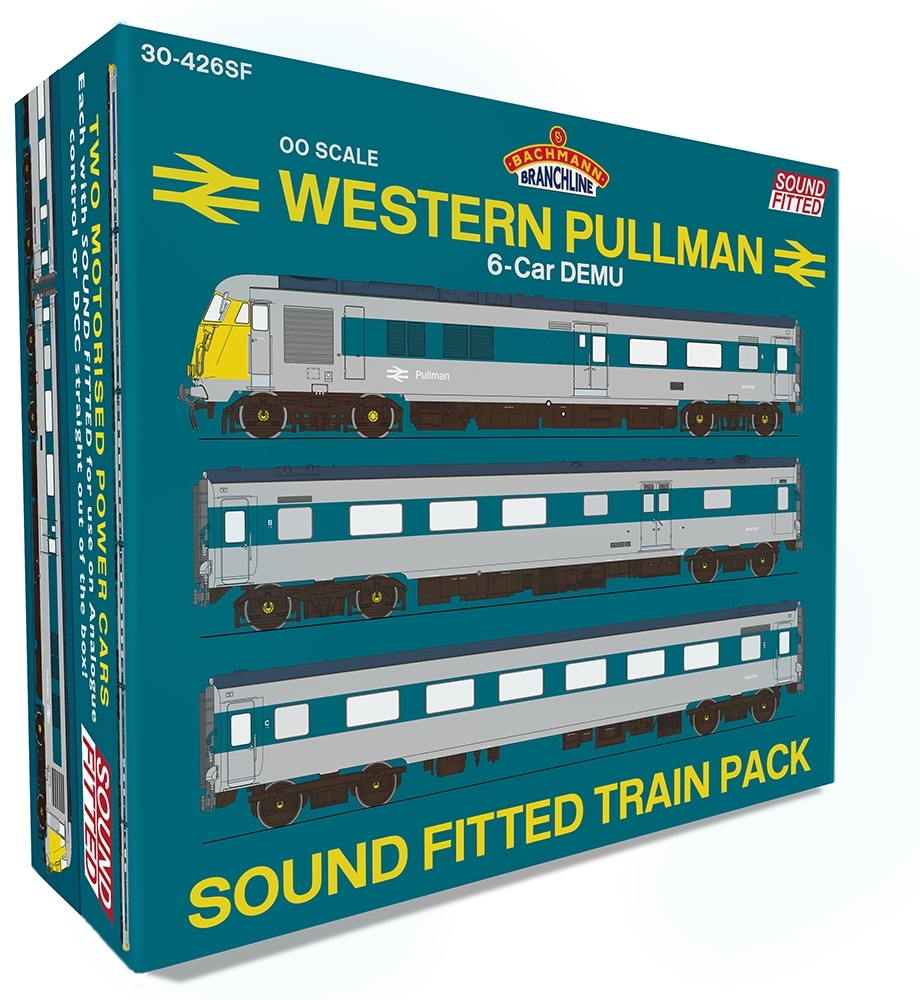 A highlight of our Winter 2022 British Railway Announcements, we are proud to present the Western Pullman Train Pack. The impressive six-car train includes two motorised power cars, both with SOUND FITTED for a truly immersive operating experience.

This majestic model was born from the Bachmann Branchline Midland Pullman – a multiple award winner including being named model of the decade in 2020 – and this new train pack accurately depicts the Midland units following their transfer to the Western Region. Exquisitely decorated in the iconic Pullman livery of reverse blue and grey, this six car unit features two motorised power cars, each fitted with a Zimo sound decoder to provide sophisticated, synchronised sounds from each power car whether you’re running on analogue or DCC. The features continue as directional lighting, interior saloon lights and lighting in the leading end cab - with auto-off when moving – all comes as standard. When used on DCC, 28 independent sound and light functions can be enjoyed – including the operation of the individual table lights fitted inside each of the six cars.

Analogue Users: Please note that basic prime mover sounds will operate and will vary according to use when this model is used on analogue control (DC) straight from the box! Directional lights and passenger compartment lights will also illuminate when power is applied. If sufficient voltage is available, the leading cab lights will illuminate when stationary.

Born as a result of the 1955 British Railways Modernisation Plan, Midland Pullman 6-car units were built by Metro-Cammell of Birmingham from 1956-59. Part of a batch of five Blue Pullman sets, the two ’Midland Pullmans’ were designed to herald a new age in high-speed, luxury rail travel. The design was a striking streamlined body profile carrying a bold and bright ‘Nanking Blue’ livery. With its pair of 1000hp NBL/MAN engines and a top speed of 90mph, the Blue Pullman offered passengers luxurious high-speed travel with innovative new features, such as air-conditioning, a public-address system and reclining seats. Operations commenced on the Manchester Central to London St. Pancras service on 4th July 1960.

Completion of the West Coast Main Line electrification scheme in 1966 and the introduction of the new high-speed electric services from Manchester to London meant the end of Pullman operations on the BR Midland Region. Both sets were withdrawn and stored at Swindon until it was decided that they would be best utilised on the Western Region, operating alongside the three 8-car ‘Western Pullman’ sets already in service. Whilst at Swindon, modifications were carried out before they were formally transferred in March 1967.

Once in service both ex-LMR sets were based at Bristol Bath Road. The sets operated in a 12-car formation on the morning Bristol Temple Meads to Paddington service where they were then split – with one set working a mid-day return journey to Oxford, and the other a mid-day return to Bristol. Once back at Paddington, the sets would be recoupled back into a 12-car formation and work the return service back to Bristol Temple Meads in the evening.

Further modifications began in December 1969, when a cosmetic overhaul, including a refresh of the interior carpets and upholstery occurred, along with the downgrading of the first-class accommodation in the DMBFL and MFLRK vehicles to second-class. The most striking aspect of the overhaul was the application of a new livery which more closely followed the new corporate-image, a reversed version of the striking new BR Blue and Grey InterCity stock livery, in-keeping with what had already been applied to the new Mk2 air-conditioned Pullman vehicles operating on the West Coast Mainline. The BR ‘Double Arrows’ insignia and the word ‘Pullman’ was then applied to the lower bodyside of the power cars.

The end came with the dawn of 1973 and the introduction of air-conditioned Mk2 coaching stock, there was now little difference between the standards of regular-service coaching stock and the Pullman units. Combined with the fact that the sets were a unique fleet of 5 with increasing maintenance costs, the inevitable came on Friday 4th May 1973 when Western Region Pullman services ceased. An enthusiast special was run the following day with an itinerary which covered elements of the former Western Region routes operated by the trains throughout their service lives.