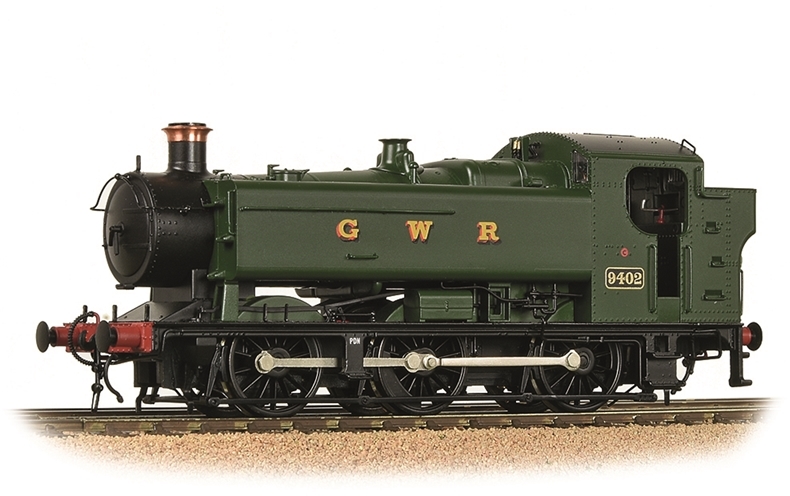 The popular ‘94XX’ Class 0-6-0 pannier tank was the last GWR steam locomotive; the first ten were turned out in the company’s Middle Chrome Green by Swindon before nationalization; they were effectively the tank version of the Collett '2251' tender engine. The remaining 200 were built for BR in unlined black livery by outside contractors Robert Stephenson, Yorkshire Engine Co. and W.G Bagnall between 1949 and 1956, with minor detail differences.  All were capable of steam heating coaching stock.

They were a development of the numerous ‘57XX/ 8750’ Class, designed for secondary mixed traffic and as shunters, with an instruction from the GWR’s General Manager, Sir James Milne, that they should be of more modern appearance than the traditional GW pannier tank.  The design of the class was unusual in that they were one of the few pannier tank designs with taper boilers; superheating was fitted to 9400 to 9409 only. The engines were mostly used for heavy shunting and short distance freight and passenger duties, but numbers 8400 to 8406 were employed on the former LMS system at Bromsgrove giving banking assistance on the Lickey Incline.

With the onset of dieselisation, the working life of the class was very short and from a class of 210, just 78 were still in use in January 1964, withdrawals having commenced in 1959. By the end of June 1965, the last members of the class were withdrawn with some engines being cut up when they were barely 5 years old.  Consequently, only a limited number of the class received the BR late crest.  Locomotives 9400 and 9466 survive in preservation.